3 Trees and a Rose Garden with Needs….

A quaint corner lot on the west side with an owner who asked for lots of blossoms and a cozy canopy of green leaves and vines.  This was a yard that had little to present itself with except a neglected rose garden and 3 specimen trees: a Dawn Redwood, an established California Coast Redwood and a handsome, old Japanese Maple.

The owner liked the over-arching Privet hedge that had formed an archway over the front gate. After discussions it was decided to remove the old hedge and install a new one even though the client knew that this meant a time of waiting before the “archway” returned. To help ease his angst, existing vines were encouraged and given more support to be able to grow higher and new vines were added.

An existing Bougainvillea was cut back hard and then retrained along wires up the side of the house. Two more Bougainvillea were added to do the same but since they are notorious for going into shock when planted from a container and subsequently take several seasons to establish, I added a beautiful big blue-flowering Morning Glory vine next to the Bougainvillea. This took off and bloomed immediately which delighted the owner.

The street entry was upgraded with a brick set in concrete in a pattern used at the front door steps.  This addition of hardscape dramatically changed the mood of the entry to this 100 year old house – practical, charming, not overdone and complimentary to existing hardscape.

Roses are amazing! They respond rapidly to care and attention after long periods of neglect. A few had reverted to rootstock but all in all that has been a wondrous transformation to witness.

Working under low tree canopies in a tight space can be challenging. Going from significant shade to full sun within a few feet requires  detailed knowledge of plants. I also had to consider bloom-time of each plant in order to have year round blossoms present in the garden. 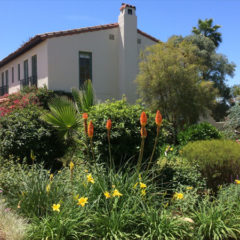 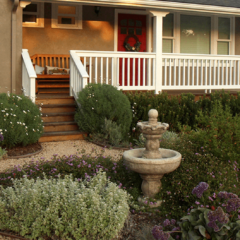 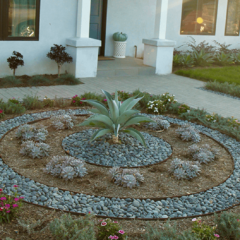 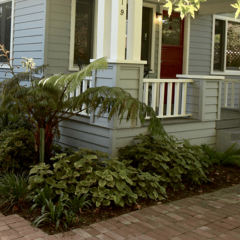 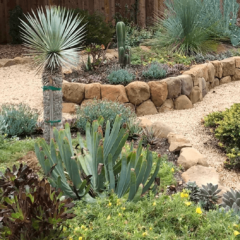 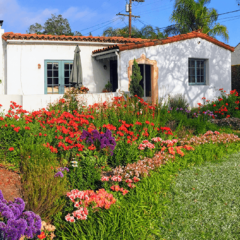 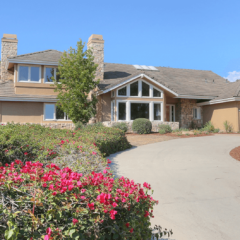 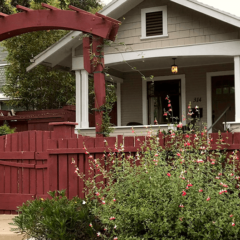 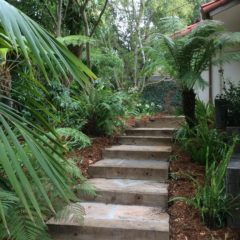 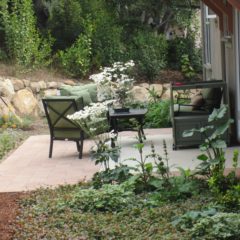 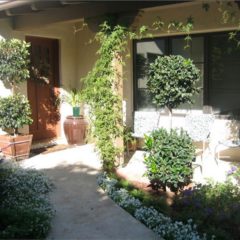